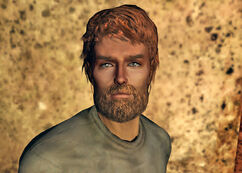 “Text of the quote.”

Sid and a group of his friends were captured by super mutants in Vault 87. His friends were mutated into extremely deformed creatures, and he was told that he would soon meet the same fate. Upon the Lone Wanderer's arrival in Vault 87, Sid had lost almost all rational thought as a result of his situation.[1]

Sid appears only in Fallout 3.

In the G.E.C.K., there are dialogue options explaining that he killed all of the people in his isolation room and was moved to another isolation room by super mutants, which will explain the isolation room with two dead wastelanders and a raider.

GECK render
Add a photo to this gallery

Retrieved from "https://fallout.fandom.com/wiki/Sid_(Fallout_3)?oldid=3369378"
Community content is available under CC-BY-SA unless otherwise noted.