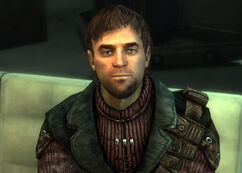 Shrapnel lives in Rivet City with his partner Flak. Together they run the Flak 'N Shrapnel's weapons store in the Rivet City market.

Shrapnel, 50, is grizzled and rough around the edges, but he has long since left his raider days behind. He spends his days in the store with Flak, selling merchandise. He gets along with Flak because they share a fascination with guns. However, he's usually rude and insulting to everyone else. At Flak's request, he tries hard to not be rude when he's behind the counter of the shop, but he's finding it difficult.[1]

Together with his partner Flak, he runs the Flak 'N Shrapnel's weapons store in the Rivet City marketplace. He can sell you ordnance and repair your weapons. Flak and Shrapnel share their store's inventory, so buying or selling from either one of them will update both of their stocks. This means that if Flak is enslaved by the player for Paradise Falls, Flak 'N Shrapnel's in the Marketplace will still be open. They consistently have a larger amount of caps than the other shops in Rivet City.

* The Inventory key is not technically obtainable. The game sets a condition for obtaining it that Shrapnel be dead and Flak be dead or enslaved. Since Shrapnel is set as essential, he cannot die. Their room key can be pickpocketed from Shrapnel.

Shrapnel appears only in Fallout 3.

Shrapnel in an endings slide
Add an image to this gallery

Retrieved from "https://fallout.fandom.com/wiki/Shrapnel?oldid=3131122"
Community content is available under CC-BY-SA unless otherwise noted.