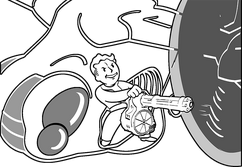 “Now... we have a vertibird on standby, fully armed and ready to depart. Use it to carry our message to Fort Strong and wipe those dirty mutants from the face of the earth. Dismissed.”— Arthur Maxson

Show No Mercy is a Brotherhood of Steel main quest in Fallout 4.

Meet Elder Maxson on the flight deck for the Sole Survivor's first assignment as a Brotherhood Knight after becoming familiar with the Prydwen and the crew.

Maxson's orders are to travel to Fort Strong, then exterminate the super mutant forces and secure the armory, which will give the Brotherhood an advantage in the upcoming war.

Step onto the Vertibird and man the mounted minigun. After a short trip, the aircraft circles the area while the player character uses the minigun to kill the super mutant behemoth (and any remaining super mutants after the Vertibird lands).

Disembark and remove all indicated super mutants. Next, enter the armory and wipe out all hostiles in the building.

Talk to Paladin Danse, who decides to stay and make sure the armory is secure (the player character can however ask him to join them by just interacting with him again on the spot). One can also pass a medium speech check and ask why he hates super mutants so much.

Return to the Prydwen and speak to Maxson for a reward of Vertibird signal grenades.

Retrieved from "https://fallout.fandom.com/wiki/Show_No_Mercy?oldid=3314117"
Community content is available under CC-BY-SA unless otherwise noted.