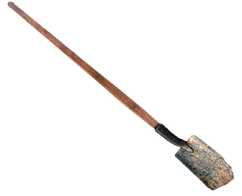 The shovel is a weapon and a tool in Fallout: New Vegas.

A wood handled shovel, required for digging up graves. In combat it can be used against weaker enemies without wasting ammunition or the durability of stronger melee weapons.

It has a special Grand Slam attack that does regular damage in V.A.T.S. at the cost of 8 more action points, but has a chance to knock down enemies (requires a Melee skill of 50).

It is possible to execute Grand Slam outside of V.A.T.S. (without the required Melee skill of 50 to perform the move) by initiating a power attack (hold attack button) while moving forward.

The shovel can successfully strike about 1495 times from full condition before breaking.

Retrieved from "https://fallout.fandom.com/wiki/Shovel_(Fallout:_New_Vegas)?oldid=3430935"
Community content is available under CC-BY-SA unless otherwise noted.