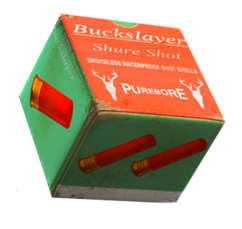 Shotgun shell is a type of ammunition in Fallout 76.

This section is transcluded from 12 gauge shotgun shell. To change it, please edit the transcluded page.

The gauge number is the number of lead balls of that gun's bore diameter that would weigh a pound. The smaller the number, the larger the bore.

Sizes of shot is the individual lead or steel pellets that are fired from the weapon, which vary as well. The most common combat load is 00 shot, pronounced "double-aught." A typical 12 gauge shotgun shell loaded with 00 Shot contains nine to fifteen pellets (nine for standard, 12 or 15 for magnum shells). Each pellet is 8.4 mm in diameter (0.33" or 33 caliber) and weighs 3.45 grams.

These Buckslayer Shure Shot 12 gauge shells are marked as being 2 3/4" shells using 0 buckshot. The shells are produced by the Purebore ammunition company and come packaged in red and green boxes.

With the Ammosmith perk or Ammo Factory legendary perk, the crafted amount of rounds increase incrementally, coinciding with the perk's added percentages, crafting more rounds for the same amount of materials. 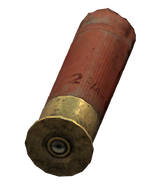