20h 20m
“A love-struck Raider boss has decided to get married, even though his bride-to-be wants no part of it. Save the kidnapped beauty from the clutches of her unwanted groom.”

The leftmost room of the floor has the kidnapped bride, a random female rare dweller who will join the player's vault. The room she is in also contains a random rare outfit. From here, to the left, the elevator goes down to the leftmost room of the second floor, which contains three raiders. It also goes up to the top floor. The top floor has three groups of three raiders in the first three rooms from the left, and three mole rats in the rightmost room.

This quest is a reference to the term shotgun wedding, though their wedding is not because of the actual meaning. 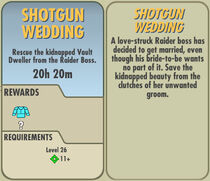