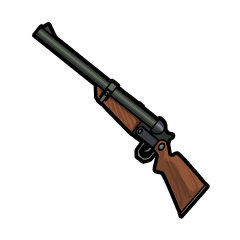 “Get close and say hello... with a load of buckshot.”— In-game descripton

The shotgun is a weapon that appears in Fallout Shelter.

A shotgun, also called a "scattergun," is a firearm designed to shoot a multitude of lead or steel balls of varying sizes, greatly increasing the weapon's hit potential. This makes it very effective at hunting game.[Fallout 2d20 1] However, the accuracy and power found at close range starts to diminish as the target gets farther away. Shotguns designed for the military's use are often called "combat shotguns."

The shotgun is a breach loading shotgun featured in Fallout Shelter that fires shell ammunition. Dealing a minimum of 9 damage per attack, it has the second highest damage output for a shotgun in the game.

A high Endurance statistic is needed to effectively create the shotgun.

Shotgun card
Add a photo to this gallery

Retrieved from "https://fallout.fandom.com/wiki/Shotgun_(Fallout_Shelter)?oldid=3495364"
Community content is available under CC-BY-SA unless otherwise noted.