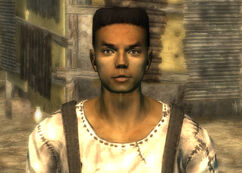 “Hey, me and shortness go a long way back, so shut up!”

Shorty is one of the residents of Big Town in 2277.

Although diminutive, Shorty received his nickname from the fellow residents of Big Town due to his fiery temper: "Short-T." Currently, he's praying for a quick death in the basement kitchen of the Germantown police station.[1]

Big Trouble in Big Town: As an optional objective, the Lone Wanderer has to save Shorty in addition to Red.

If Shorty is undiscovered during Big Trouble in Big Town and encountered after completing this quest, he will act as if the player character had saved him.

* Only if the Small Guns path is taken in Big Trouble in Big Town.

Shorty appears only in Fallout 3.

Retrieved from "https://fallout.fandom.com/wiki/Shorty?oldid=3185317"
Community content is available under CC-BY-SA unless otherwise noted.