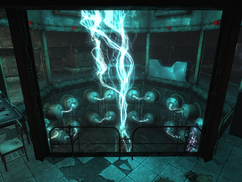 Location of the Tesla coil

“Get there, get the coil, and get back as safely and quickly as possible. Any questions?”— Tristan

Shock Value is the fourteenth Fallout 3 main quest and achievement that is added to the game in the Broken Steel add-on. It is also the second main quest in Broken Steel.

Right after completing Death From Above the Lone Wanderer is told to talk to Paladin Tristan in the Citadel. Tristan briefs them on their next mission, which is to retrieve a pre-War experimental device called a Tesla coil from the remains of Olney Powerworks. The scribes need the coil to finish a little surprise for the Enclave: the Tesla cannon.

Southeast of Old Olney is an Enclave camp where the controller can be tested. All that must be done is to unlock the deathclaw cage and let it kill the Enclave soldiers. One can also sneak up the nearby collapsed bridge and get within range of the deathclaw and watch it attack the Enclave soldiers. If one cannot pick the lock, the Enclave officer has the key. Often times, until the Lone Wanderer enters the Olney sewers, the 'completed' notification for this (optional) task will not appear, and the marker will stay on the radar.

Upon arrival at Olney, bringing up the local map on the Pip-Boy will show the entrance to the sewer. Once inside the sewer, find the ladder which leads to Old Olney underground. Arriving there, the Lone Wanderer is greeted by the ghouls Wint and Kidd who are the last survivors of a group of ghouls which tried to establish a settlement here, where many met their end at the hands of the deathclaws. The ghouls leave after conversing with the Lone Wanderer, deducing that it's safe to leave the way they came.

From here on, the way to Olney Powerworks is linear. Navigating the deathclaw-infested Old Olney underground, one will find Wint's and Kidd's dead comrades, including Badger, Connelly, Dunbar, Carl and Sanders, and eventually reach a door to Old Olney S. Wilson Building. In the building, there are a couple of Enclave soldiers and a door on the second level (behind two Enclave soldiers) that leads to Olney Powerworks.

The old power plant is guarded by sentry bots which can be deactivated from security terminals. One can take the short way by going through a door on their left after entering the area, and then hacking the Very Hard terminal there, or take the long way by veering to the right. Either way, one will eventually reach the room with the Tesla coil, which is inside the bright electrical chamber. Removing the coil while the power is on will cause a large amount of damage. To acquire the Tesla coil without power damage, jump down into the Tesla coil chamber, enter the adjacent room, and use the Hard terminal to shut off the power. Then go back into the chamber and remove the Tesla coil from its base.

Another way to sustain less damage is to jump into the Tesla coil chamber and activate the three emergency switches inside the chamber. One will still receive a shock, but it is not as harmful. If skill level prevents access to the shutdown switch, throwing a few pulse grenades into the chamber will knock out the power and allow access to the three switches.

Once done, a nearby ladder leads out to a street north of Old Olney. Deathclaws can be encountered here, and after handling them, one may return back to the Citadel. Hand the coil over to Tristan and receive the next assignment, Who Dares Wins.

Retrieved from "https://fallout.fandom.com/wiki/Shock_Value?oldid=3428850"
Community content is available under CC-BY-SA unless otherwise noted.