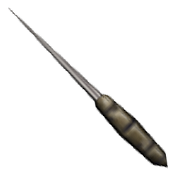 The shiv is a weapon that was to appear in Van Buren, the canceled Fallout 3 by Black Isle Studios. It also appears in the Van Buren tech demo game files.

A shiv is a crude, hand-made stabbing or slashing weapon, typically made in secret by prisoners and used for attacking guards or defending against other inmates. The shiv in Van Buren appears to have been made from a large nail or some other pointed piece of metal, with cloth or tape wrapped around one end to serve as a grip.

While it doesn't appear in the Van Buren tech demo, it is still present in the game files and can be spawned with the console command CreateEntity WeaponsShiv.wea.

Retrieved from "https://fallout.fandom.com/wiki/Shiv_(Van_Buren)?oldid=2960896"
Community content is available under CC-BY-SA unless otherwise noted.