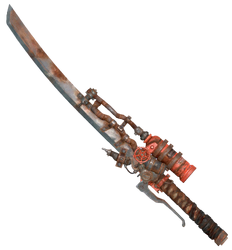 “I think you should hang onto that sword. It'd put a smile on Granddad's face to know it was being used to help people.”— Abraham Finch when he gives the shishkebab to the Sole Survivor

The Shishkebab is a melee weapon in Fallout 4.

Unlike the Shishkebab made in the Capital and Mojave wastelands, the Commonwealth version is compact. It uses a more potent fuel made from a Schoelt canister, so a motorcycle fuel tank is no longer required, although a motorcycle handbrake is still present. Also, the basis of the weapon is a modified wakizashi rather than a makeshift sword made from a lawnmower blade.

When simply held in hand, the sword emits a steady stream of small bluish flames from the nozzles mounted along its blade. However, when the weapon is swung, the fire immediately starts burning much hotter and brighter, creating a far more spectacular effect than any previous incarnation of this weapon ever displayed.

"Shish kebab" is a traditional Turkish dish consisting of meat threaded on a skewer and grilled.

The Art of Fallout 4 concept art
Add a photo to this gallery
Retrieved from "https://fallout.fandom.com/wiki/Shishkebab_(Fallout_4)?oldid=3451463"
Community content is available under CC-BY-SA unless otherwise noted.