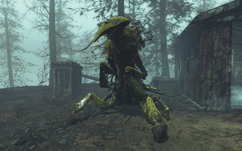 “That's right. Shipbreaker, I call her. A wily old beast. I've put all the Harbormen on the lookout for her.”— Old Longfellow

Shipbreaker is a unique legendary fog crawler on the Island in 2287.

Shipbreaker is a unique fog crawler who has haunted Mount Desert Island for decades. The time spent in the Fog has apparently mutated her so that she gives off a unique radio signature that interferes with regular radio equipment. Old Longfellow has spent a lifetime tracking the beast and would like to take his revenge on her - for all the deaths she has caused and friends she took from him. Unlike other fog crawlers, Shipbreaker is also unusually vicious and destructive, killing for sport, rather than out of necessity. Taking her out is as much personal as it is a public service to the people of Far Harbor.

The name was bestowed on her by Old Longfellow, who started the hunt for Shipbreaker a few years back when wrecked boats and dead people started washing up on the shores. The reports eventually gave him a clear picture and he dedicated himself to the hunt ever since.

Fog crawlers are large, mutated crustaceans which are the result of the radioactive fog altering the local shrimp population.[1] The exact species from which fog crawlers mutated is not immediately apparent, but they are most likely a form of mutated mantis shrimp (specifically the Squilla mantis) based on the anatomy of their forelimbs and the presence of a distinctive neck which most crustaceans lack. Another potential candidate is the crayfish.

The different types of tail "fans" on different types of fog crawlers could determine their gender, as crayfish carry eggs under the tails or as courtship during mating to avoid injury. The smaller legs (swimmerets) on the underside of the fog crawler are a holdover from when it remained an aquatic creature, assuming it isn't still largely amphibious. It seems that at some point the creature's head had evolved a mobile neck similar to terrestrial insects, as well as morphed into a kind of arrowhead shape. They seem to have eight eyes, four in a straight line on each side of the head, with the one second from the front being the largest. They also seem to lack any sort of visible mouth.

They live in the deep Fog for which they are named, and are seldom encountered outside the island's deadly mist.[1] Fog crawlers are known to make deep, booming vocalizations as an indicator of their presence. They are also among the strongest and most tenacious foes encountered in their respective areas, combining excellent protection with a generous health pool and the ability to attack at range.

Shipbreaker only appears during the quest Shipbreaker and has a massive 4000 points of physical damage resistance. Upon completion of the quest, Old Longfellow will award the player character with Skipper's Last Stand, a unique variant of the harpoon gun.

Shipbreaker appears only in the Fallout 4 add-on Far Harbor.

Retrieved from "https://fallout.fandom.com/wiki/Shipbreaker_(creature)?oldid=3181165"
Community content is available under CC-BY-SA unless otherwise noted.