Emperor
Leader of the Shi 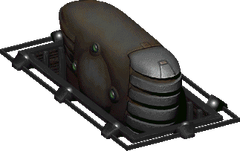 “The Emperor remains hidden from prying eyes. As my job is to act as the Emperor's screen, I cannot and will not tell you where he is.”— Ken Lee

The Shi Emperor (designation Emperor v8.8 Computer Terminal) is an advanced computer used by the Shi of San Francisco. In 2241, this computer is known as the Emperor by the Shi, and is therefore the head of their organization.

Only the innermost ruling circle of the Shi know that the emperor is not really a person. Ken Lee, the "advisor" to the emperor, dictates the Shi's actions based on the predictions of the emperor computer by using his knowledge of human nature to decide the best course of action to take, through using the information the computer provides. While the computer possesses no artificial intelligence, it is capable of making predictions based on all factors it had access to, and with astonishing accuracy. One such example is the way in which it predicts that the Chosen One's tribe is 97% likely to have been taken to an Enclave compound.

The Emperor is a naval computer and therefore has logs on much of the Chinese naval data stored on it. The vast majority of this data is corrupt, however, and only a few scraps can be pulled up by the player through its terminal. It also keeps more complete logs of the Shi's activities and experiments. These seem to be failing in the most part, as two of the three sections of experiments have ended in disaster and the third has been terminated because of the Hubologists.

The Shi Emperor appears only in Fallout 2.

Retrieved from "https://fallout.fandom.com/wiki/Shi_Emperor?oldid=3301134"
Community content is available under CC-BY-SA unless otherwise noted.