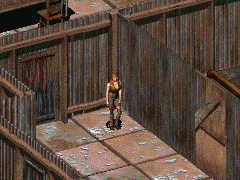 “We're like a family! We take care of each other. Well, except for Shark, who's always breaking things. And Victor, who looks at people funny. But Vinnie is cool. And we do stuff together. You know, we're like friends and stuff.”— Sherry about the Skulz

Sherry is a member of the Skulz around 2161.

Sherry is a member of the Skulz, located near the door to their gang hideout in the back of the Crash House.

She is the optimist of the gang, being the only apparent person who has other opportunities waiting for her. She thinks about leaving the gang, but was somewhat raised by the members, so she has a natural connection to them.

Sherry appears only in Fallout and is mentioned in the Fallout Bible.

Retrieved from "https://fallout.fandom.com/wiki/Sherry?oldid=3422741"
Community content is available under CC-BY-SA unless otherwise noted.