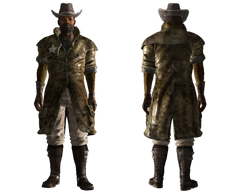 The sheriff's duster and sheriff's hat are pieces of clothing in Fallout 3.

The duster has a Damage Resistance of 5, and the hat has a DR of 1. Both can only be repaired by merchants.

The duster and hat can be found on the body of Lucas Simms. They are easily obtained by letting Mister Burke kill him in The Power of the Atom. The hat can also be acquired from Sonora Cruz by pickpocketing while having the Lawbringer perk. 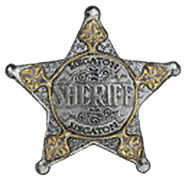