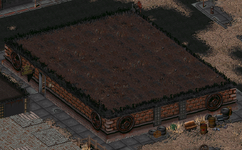 The Sheriff's department is the location of Redding's sheriff and is the center of law enforcement in the city.

Earl Marion occupies the front room, which also has some desks and lockers. Through the door immediately opposite the entrance there are three cells for prisoners.

Through the southern door in the front room is another room where Earl presumably sleeps. This room contains a desk and a footlocker as well as a bed.

The Sheriff's department appears only in Fallout 2.

Retrieved from "https://fallout.fandom.com/wiki/Sheriff%27s_department_(Redding)?oldid=2814244"
Community content is available under CC-BY-SA unless otherwise noted.