Method to the Madness

Shenley's Oyster Bar is an unmarked location in the Back Bay neighborhood of Boston in 2287. It is on the block immediately west of Hubris Comics.

The bar may be initially accessed through short alleys to the east and south; these routes are mined and guarded by a single turret. Doors to the north and west are chained from inside the courtyard and initially inaccessible. There is a chemistry station in the courtyard near the west chained door, and an ammo box on the patio outside the diner.

Raiders occupy the exterior courtyard and diner, the interior, and the roof. The entrance to the bar is inside the diner, behind the counter to the right. The interior consists of a kitchen and storage closet and a stairwell to an exit to the roof. No other areas are accessible.

On the roof, there is a set of shelves with a leveled sniper-type weapon above an ammo box, as well as a small shack containing a wooden crate and a sleeping bag. Up a short set of stairs is a steamer trunk next to some crates. Climbing these crates leads to a duffle bag and a chem box.

On the top floor of the interior near the roof exit, there is a skeleton with its right arm handcuffed to a dismembered skeletal right arm and hand. The presence of a hack saw in front of the skeleton implies that the arm of a fellow captive was sawed off rather than the handcuffs. This is a reference to the film Saw. 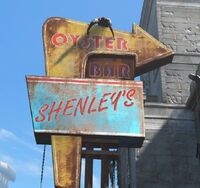