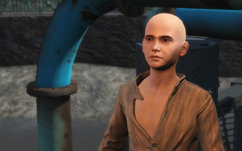 Sheng Kawolski is a young boy who is in charge of the water purifier in Diamond City in 2287.

Despite his age, Sheng throws his weight around with any adults he encounters, even calling the player character a "jackass" to their face if they refuse to buy the purified water which he peddles.[1]

During the day Sheng is in charge of Diamond City's water purifying system. At night he goes to the schoolhouse and sits at a desk to take night classes.[2]

He will replace Travis Miles as the DJ of Diamond City Radio should Travis be killed during the Confidence Man quest.[4]

Upon first approaching Sheng, the Sole Survivor will find him arguing with one of the Diamond City guards about the purity of the water he is in charge of keeping clean.[5]

Sheng Kawolski appears only in Fallout 4.

Sheng was voiced by one of Emil Pagliarulo's sons, though he is not credited for the role.[7]

Retrieved from "https://fallout.fandom.com/wiki/Sheng_Kawolski?oldid=3434347"
Community content is available under CC-BY-SA unless otherwise noted.