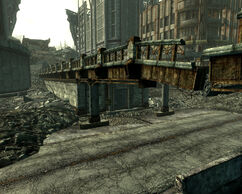 The shelter is a small, unmarked area on the Pip-Boy 3000 world map, but the door appears on the Pip-Boy's local map. It is located south of the Chryslus Building, and east of Farragut West Metro station. The entrance is a door underneath an intact bridge.

If one starts at the entrance to the Chryslus Building, head south to the second semi-intact road, which should have concrete dividers in the middle.

Just inside the entrance are a unique arrangement of items in the shape of a tower with a chessboard as a base, a small burned book supported by pencils with a coffee mug, an upside-down Nuka-Cola and a tin can balanced above it. Touching this arrangement will topple it.

Further inside the shelter is a feral ghoul and what appears to be the remains of a lab. Medical supplies are stuck into the face of a damaged garden gnome to form an effigy of the Statue of Liberty, and a trail of plungers go from the floor, up the wall, and onto part of the ceiling, accompanied by bloody handprints. The skeleton of the would-be wall-crawler lies on the floor under the last plunger on the ceiling. A nearby mannequin brandishes more plungers and even wears one as a hat. There are about 50 plungers in the room, including one on the ceiling, which when shot oddly falls over upwards onto the ceiling. This would appear to be because there is an invisible barrier where that plunger is, and the roof has no collision. Thus, the plunger falls on the invisible barrier, and just appears to fall on the ceiling because of perspective. There is a man of plungers on the gurney with a metal helmet for a head and a knife in his crotch. The damaged garden gnome on the desk has a stimpak in his arm, is wearing tortiseshell glasses

Needled gnome
Add an image to this gallery
Retrieved from "https://fallout.fandom.com/wiki/Shelter?oldid=3207859"
Community content is available under CC-BY-SA unless otherwise noted.