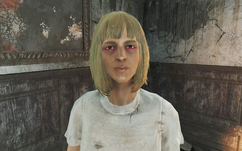 Shelly Tiller is a wastelander and an assassination target found hiding on the second floor of the National Guard training yard in the Commonwealth in the year 2287.

Shelly is a wastelander who somehow ended up on someone’s bad side. The situation has escalated to a point where they have hired Kendra to kill her. She is hiding at the National Guard training yard, wanting to be left alone.

Shelly Tiller appears only in Fallout 4.

Retrieved from "https://fallout.fandom.com/wiki/Shelly_Tiller?oldid=3261394"
Community content is available under CC-BY-SA unless otherwise noted.