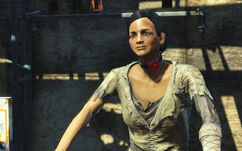 Shelbie Chase is an enslaved merchant in Nuka-World in 2287.

Shelbie Chase is a slave in the Nuka-Town market, acting as the general trader for the area. Shelbie generally keeps her head down while supplying general goods to those looking to trade but shows some small relief over Colter's death.

Shelbie Chase appears only in the Fallout 4 add-on Nuka-World.

Retrieved from "https://fallout.fandom.com/wiki/Shelbie_Chase?oldid=3353016"
Community content is available under CC-BY-SA unless otherwise noted.