Standing approximately ten feet tall, the sheepsquatch is a huge cryptid bearing resemblance to a sheep. Sheepsquatches possess a set of large horns protruding directly from the sides of their heads. Their skin is pink and raw, with large quills poking out from their upper back. Despite their resemblance to sheep, their wool is stiff and grey, with only meager patches visible on the animal. Their faces appear almost skeletal, especially around the nose area. Their eyes are large and fish-like, with rectangular pupils typical of normal sheep and goats. They have small ears, dwarfed by their massive horns. They have large jowls, prominent especially when howling. Their teeth are small and flat, like that of a herbivore. However, sheepsquatches are carnivores, so it is unclear as to how a sheepsquatch is able to eat effectively. They have a potbelly and 3 large claws on each hand. They stand on two legs, on large hooves. Their legs have inverted knees, similar to that of a dog's legs. They have a short tail.

Sheepsquatches communicate through howls and groans, with long, somber, drawn-out moans. This noise appears to come from the unique way that they vibrate their jowls when calling out. This method of calling allows them to change the pitch quickly and easily, in order to convey what they want to.

Their intelligence is currently unknown. They appear to be solitary, however in the Free Range event, more than one can appear at the end of the event.

Sheepsquatches appear only in the Fallout 76 add-on Wild Appalachia.

The sheepsquatch is a woolly-haired cryptid reported across numerous counties in West Virginia, predominantly within the southwestern region of the state. 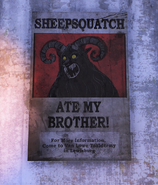 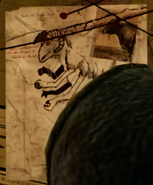 Drawing of a sheepsquatch-like figure

Photo of a possible sheepsquatch sighting

Calvin van Lowe's design of the imposter sheepsquatch, as seen in his lab in Van Lowe Taxidermy.
Add an image to this gallery

Retrieved from "https://fallout.fandom.com/wiki/Sheepsquatch?oldid=3025780"
Community content is available under CC-BY-SA unless otherwise noted.