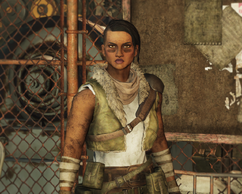 Sheena is a raider in Appalachia in 2103.

Sheena is one of the three raiders that inhabit The Crater war room along with Burke and Pierce. As a kid she would always win at the Blast Radius board game due to her strong tactical intellect. Sheena is the tactician of the Crater War Party and plans out their operations against the Brotherhood under the orders of Meg Groberg.

If one calls Burke a freak in conversation with them, Sheena will come to their defense, though Burke will remark that they are not surprised by such remarks anymore.[1]

Sheena appears only in Fallout 76, introduced in the Steel Dawn update.

Retrieved from "https://fallout.fandom.com/wiki/Sheena?oldid=3464540"
Community content is available under CC-BY-SA unless otherwise noted.