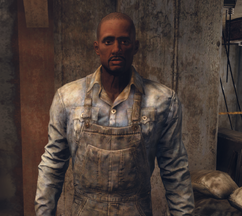 Shawn Hockman is an independent scavenger operating in Appalachia in 2103. He is visiting Fort Atlas to protest after being robbed by a patrol claiming to be part of the Brotherhood of Steel.

Although he occasionally works with the Settlers of Foundation to get repairs and find inaccessible items, Shawn lives on his own and likes it that way, running independent scavenging jobs.[1] At some point, he was robbed at gunpoint by a group of power-armored men claiming to be from the Brotherhood of Steel. Regardless of whether or not the robbers were actually from the Brotherhood of Steel (Knight Shin says they absolutely were not), Shawn is frustrated that the Brotherhood would let people get away with this, especially in their name. The incident made him more sympathetic to the Raiders, stating that "at least they don't pretend to be the good guys."[2][3]

Shawn Hockman appears only in Fallout 76, introduced in the Steel Dawn update.

Retrieved from "https://fallout.fandom.com/wiki/Shawn_Hockman?oldid=3385756"
Community content is available under CC-BY-SA unless otherwise noted.