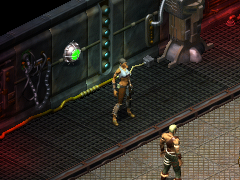 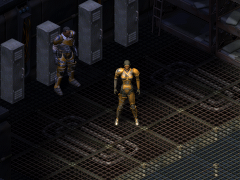 Shauri next to her brother in Bunker Gamma 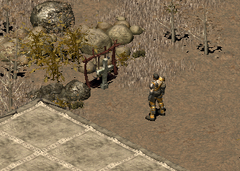 Shauri's grave in Bunker Epsilon, mourned by her brother

“Hello, my name is Shauri. Tiduk over there, my brother. We're here to join your Brotherhood. We have both been very inspired by your deeds.”

Shauri is a new recruit for the Brotherhood of Steel from Brahmin Wood in the year 2197.

She came with her brother, Tiduk, and despite his will to stop her from joining the Brotherhood, she is very confident in her choice to stay. She becomes a commander of the squad which consisted of other warriors, along with her brother.

Shauri is eighteen years old. She is a dark haired girl of breathtaking beauty. She has dark, thoughtful eyes, a slender form, and hair that she wears down to her waist. She is dressed in the simple tribal clothes that women wear in her village.

After one of their missions, their squad is assaulted by the Calculator's robots. During the battle, Shauri dies. Her grave could be seen in Bunker Epsilon, along with her grieving brother.

Shauri appears only in Fallout Tactics.