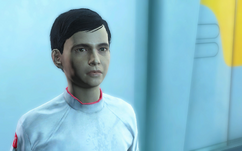 Shaun, also known as S9-23, is a prototype synth created by the real Shaun and lives in the Institute, unless the Sole Survivor opts to destroy the Institute during the mission The Nuclear Option, after which he can be sent to the Commonwealth or left to die.

Shaun was created at the behest of Father, the director of the Institute, and is a Gen 3 synth based on the real Shaun's DNA.

Madison Li expressed discomfort and irritation according to her personal holotapes as Advanced Systems has been tasked with the creation of Shaun. She was unable to understand the scientific need for the creation of a child synth, something that Father did not bother to divulge. In actual fact, Shaun was created not for any research or scientific advancement, but simply on the whim of Father.

When the Sole Survivor arrives at the Institute to locate their child during Institutionalized, they are briefly led to believe that the synth Shaun is the real one in order to test the child's responses. Shaun responds negatively and calls for help from Father before being deactivated. Father then acknowledges that it is still a prototype and does not work well.

If the player character completes one of The Nuclear Option quests, and synth Shaun is not left behind in the Institute, he will ask them to bring items (e.g. a hot plate) so he can 'take it apart' and in return will build useful items for them, such as weapon mods and the Wazer Wifle. Additionally, the player character can ask Shaun to live with them and can send him to a number of locations, similar to a companion, although he is not able to be assigned to beds, like many other NPCs. He cannot be commanded to move throughout the settlement. He will stay within the confines of a small area (e.g. near the Minutemen radio operator in the Castle).

If the player character instead completes the Nuclear Family quest, Shaun will be interactable and found within the Advanced Systems Lab. They have the ability to choose where Shaun will live by talking to him. If one subsequently decides to move him to another settlement, it must be done via the workshop interface. Shaun will sometimes ask for all sorts of parts in order to build something.

Shaun and Sole Survivor
Add a photo to this gallery
Retrieved from "https://fallout.fandom.com/wiki/Shaun_(synth)?oldid=3430794"
Community content is available under CC-BY-SA unless otherwise noted.
... more about "Shaun (synth)"
RDF feed
Has platform
PC +, Playstation 4 +  and Xbox One +