242x500px
The default appearance of Shaun, generated based on the default presets for Nate and Nora 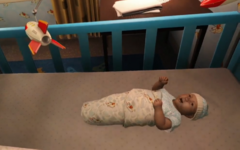 Shaun's last moment with the Sole Survivor in 2287

“At that time, the year 2227, the Institute had made great strides in synth production. But it was never enough. Scientific curiosity, and the goal of perfection, drove them ever onward. What they wanted was... the perfect machine. So they followed the best example thus far - the human being. Walking, talking, fully articulate... Capable of anything.”
200px

Shaun, also known as Father, is the son of the Sole Survivor, and the leader of The Institute in 2287.

Shaun was less than a year old by October 2077. On October 23, at the outbreak of the Great War, his parents take him and manage to flee to the nearby Vault 111 as the atomic bombs begin to fall on the Commonwealth. Unaware of the true purpose of the Vault, Shaun and his parents become frozen in cryogenic suspension. Approximately six months following their internment, a revolt occurs and the staff abandons Vault 111, leaving those frozen within unaware of what had occurred.

The cryogenically preserved Vault participants would remain undisturbed for around 150 years until the Institute discovered records regarding Vault 111. At this time, the Institute was desperate for genetic material unaffected by the radiation-ravaged wasteland for their Third Generation Synth project. The infant Shaun represented the best source for uncorrupted DNA and so the Institute set about to acquire him.

Sometime in 2227, the Institute dispatched their mercenary, Conrad Kellogg, to Vault 111 to secure Shaun. Along with two other Institute technicians, Kellogg revives Shaun, along with one of his parents. Shaun’s parent was unwilling to part with their son and put up resistance. Kellogg then promptly shoots and kills Shaun’s one parent, leaving the other in cryogenic suspension and terminating the life support on the other frozen Vault participants. Shaun’s surviving parent, eventually known as the Sole Survivor, would later escape Vault 111 in 2287.

Shaun was then raised by them as one of their own, later nicknamed "Father" for his role in providing the DNA required to complete the synths. In time, he became the acting director of the Institute. The Sole Survivor can find Shaun and can choose to side with him or not.

Shaun is absolutely, stalwartly convinced the Institute is the only hope for humanity, and tries to subtly convince the Sole Survivor of this. He gives them highly unlimited access to the Institute, introduces them to the personnel of the Institute and even trusts them with missions to seek rogue synths. His feelings about the Institute as the future and last hope of humanity is almost to an extreme point - he is possessed with an unmistakeable fear of the surface and the potential threats of the Commonwealth to the Institute, desiring to take humanity further underground and away from the radiation, mutant and danger infested surface world.

Having not been raised by his parents and only by technology, Shaun lacks compassion - though he has a strong desire for humanity to survive - and feels indifferent upon remembering the death of one of his parents. He simply refers the "incident" as "collateral damage" which potentially angers the Sole Survivor. However, he also reveals it was his personal choice to awaken the Sole Survivor from cryostasis, not an error of Vault 111. He struggles somewhat with being reunited with the Sole Survivor in the Institute, ironically seeing one of his parents 'younger' than he is, and wondering what they could have shared if the circumstances had been different.

It is later revealed that he has a very aggressive form of cancer and one of the endings is to take his place as Director of The Institute after his death, which was his primary wish all along.

If The Survivor decides to eradicate The Institute and bring the young Synth with them they will receive a holodisk recorded by Father and given to them by the synth Shaun after being interacted with. The cybernetic Shaun tells The Sole Survivor "I didn't listen to it, so I dunno what it says, but I think it's important".

It is revealed that the young boy was reprogrammed to believe that the player character was their parent, as the first meeting between the synth and player character (who was led to believe that the synth was their missing son) caused the synth to become confused and call for help. The reason for him being reprogrammed is explained by the real Shaun in the holodisk, saying "I would ask only that you give him a chance. A chance to be a part of whatever future awaits the Commonwealth."

Retrieved from "https://fallout.fandom.com/wiki/Shaun?oldid=2438865"
Community content is available under CC-BY-SA unless otherwise noted.