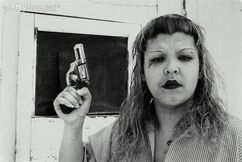 Sharon is a cruel and mean spirited woman. She is very domineering and revels in the suffering of others. She wants nothing more than a position of power in which she can sit back and have her slaves take care of her. She cares nothing for people except for what they can do to serve her and her needs.

Sharon follows the Scorpion's Bite clan because, so far, they have proven to be very profitable with very little output from her personally. Sure, she's had to cap a few people and she's been involved in a scrap or two, but for the most part it's been a breeze. Burk, the clan leader, seems competent and that can only lead to more profits.

Currently Sharon is trying to convince Burk to take over the Twin Mothers village. It's obvious that the natives have it made and that their protector is out of commission. She believes that they should strike while the time is right and just move in. However, Burk constantly rebukes her and won't explain why. She thinks it has something to do with the whore, Trisha, that Burk is shacking up with.

Sharon has not appeared nor is she mentioned in any published game. She was to appear only in Van Buren, the canceled Fallout 3 by Black Isle Studios. It is not certain if she will appear in any future Fallout game.

Retrieved from "https://fallout.fandom.com/wiki/Sharon_(Van_Buren)?oldid=3123958"
Community content is available under CC-BY-SA unless otherwise noted.