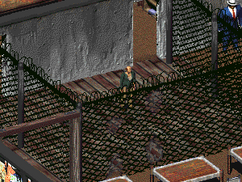 “He's just trying to be funny.”— The Chosen One, to Myron regarding a joke against the latter

Hired as an entertainer for the Shark Club, he is a terrible stand-up comic. He tries to impress the audience with his wit, but is usually achieving the exact opposite. Made worse with his very nervous demeanor,[1] the crowd will continually heckle and insult him.[2] However, he has a fence surrounding him, for his own protection.

Note: All routines are read top to bottom, point by point. Indented points are audience reactions.

This routine is only played if Myron is present in the player's party.

This routine only plays after the completion of the game.

This routine plays, but due to a bug, the player never sees the line. The comedian explodes on stage once the script triggers, though.

The Shark Club comedian appears only in Fallout 2.

Retrieved from "https://fallout.fandom.com/wiki/Shark_Club_comedian?oldid=3350377"
Community content is available under CC-BY-SA unless otherwise noted.