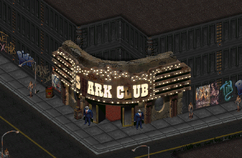 Assassinate Westin in NCR without making it look like a murder
Murder Carlson in NCR
Learn about Vault City and education from Mrs. Bishop

The Shark Club is a casino located in New Reno on Second Street, owned by the Bishop family. It is the largest casino in New Reno.

A comedian delivers lines on-stage behind chain-link fencing, which one can imagine he sorely needs, as his routine is most humorous for its lack of finesse. The patrons heckle him intermittently, as craps dealers throw loaded dice, roulette dealers spin equally loaded wheels, and 'fixed' slot machines whir and clink in the background. Stairs lead down to the basement and up to the guards' quarters.

The bartender will sell Nuka-Cola, among other drinks, and Old Man McGee can be found in the slot machine area, obsessively wasting his money in an ugly broken machine. Note that planting a second pair of loaded dice on the craps dealers may cause the game to crash.

The living quarters for the Bishop family's guards, with two storage rooms with bookcases truly -stacked- with (random) equipment suitable for starting or low-level characters and a pool table containing the Magic 8-ball, both of which can be looted as the guards here will only stop the Chosen One from looting the containers in their respective rooms.

John Bishop's wife and daughter, both of whom one can have sex with, are on this floor as well. Agreeing to have sex with one of them can prove troublesome, as mentioned in the next section.

The personal residence of Bishop and his family, featuring a luxurious penthouse rooftop pool. John Bishop is on this floor, in the pool table room, with two guards. Behind him is the door to the swimming pool area/Bishop family bedrooms.

Note that one will be teleported to Angela or Leslie Anne's room, the middle and southernmost bedrooms respectively if they agree to have sex with one of them on the previous floor. This can turn out very badly if they have not yet successfully delivered the briefcase to Bishop. They will be marooned on the top floor with three floors of hostile guards to fight through - certain death for a low-level character.

Each of the three bedrooms on this floor has a safe on the wall. Beware that John Bishop's safe (in the northernmost room) is trapped. After having sex with Angela, her safe will be open for one to loot. If chosen to have sex with Leslie Anne, she will say the combination to her safe in her sleep, or if the Chosen One has already had sex with Angela, they will have the option of simply asking Leslie Anne to open the safe once they are in her room.

The basement contains a training room and pen for Bishop's prize heavyweight boxer the Masticator and has a private boxing ring. Plated boxing gloves which gives an unfair advantage when boxing at the Jungle Gym can be found in a locker here.

Bruce Isaac claims that he was the "big draw" at the Shark Club, and the Courier may mention they have seen one of his shows.[1]

The Shark Club appears only in Fallout 2 and is mentioned in Fallout: New Vegas.

Guns and Bullets, first floor
Add a photo to this gallery

Retrieved from "https://fallout.fandom.com/wiki/Shark_Club?oldid=3415246"
Community content is available under CC-BY-SA unless otherwise noted.