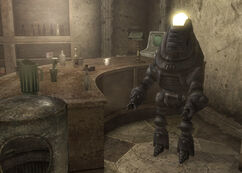 “A very special welcome to you, Sir/Ma'am.”

Shakes is a protectron robot that functions as a bartender in the Federalist Lounge at Tenpenny Tower in 2277.

Shakes is the Federalist Lounge's robotic bartender, and he dutifully serves drinks twenty-four hours a day, seven days a week. In fact, being a bartender is all Shakes has ever known; he was commissioned by Allistair Tenpenny for that very purpose. Shakes doesn't have much to say, but he can offer discounts on drinks if you know which buttons to press.[1]

Shakes serves only alcohol and stimpaks.

Shakes appears only in Fallout 3.

Retrieved from "https://fallout.fandom.com/wiki/Shakes?oldid=3129911"
Community content is available under CC-BY-SA unless otherwise noted.