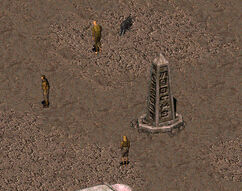 “The brahmin sure do stink this time of year.”

The Shady Sands peasants, also derogatively called losers, are unnamed inhabitants of the town of Shady Sands in 2161.

The peasants work in the town's garden and brahmin pens.

Unlike the Shady Sands citizens, the peasants cannot be talked to, other than having floating text.

Likely by mistake, two Shady Sands peasants can be found among the Skags in the Hub, talking about topics connected with Shady Sands.

The Shady Sands peasants only appear in the original Fallout.

Retrieved from "https://fallout.fandom.com/wiki/Shady_Sands_peasant?oldid=3071976"
Community content is available under CC-BY-SA unless otherwise noted.