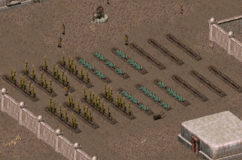 The garden is the field in which the inhabitants of Shady Sands grow their food.

The garden is located in the eastern subsection of Shady Sands. To the north is the town's well, a large two sectioned stone house containing peasants and children. A small house south of the fields. And to the northeast is the brahmin pen. It appears that maize and cabbage are grown in the fields.

In the center of the field is a weather-beaten farmer. He can be talked to about crop rotation as part of the quest Improve Shady Sands' Agriculture.

Inside the small hut to the east of the crops:

The Shady Sands garden appears only in Fallout.

Retrieved from "https://fallout.fandom.com/wiki/Shady_Sands_garden?oldid=3170178"
Community content is available under CC-BY-SA unless otherwise noted.