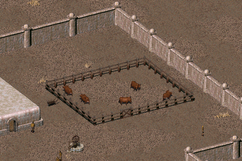 The brahmin pen is the fenced-off coral that holds a brahmin herd for Shady Sands.

The brahmin pen is located in the eastern sub-section of Shady Sands. To the south are the town's well and the garden.

Normally, there are only five brahmin in the pen at any given time. Originally, the town didn't have any brahmin, because they could barely afford to feed themselves. However, after the small group of people from Vault 15 established themselves as Shady Sands, and the G.E.C.K. was used to institute fertile fields, enough food was produced to trade for and raise cattle.

Recently, the brahmin keep getting attacked by packs of radscorpions. The Vault Dweller can be given a quest to kill the radscorpions from Aradesh.

Inside the large, two-sectioned house to the west of the pen are:

Retrieved from "https://fallout.fandom.com/wiki/Shady_Sands_brahmin_pen?oldid=3170176"
Community content is available under CC-BY-SA unless otherwise noted.