Play sound
Second_Chance.ogg
“Well you don't live here. There's nothing interesting to do, and believe you me, brahmin tipping gets old real fast.”— Tandi in 2161

Shady Sands is a small settlement in New California around 2161, led by Aradesh, a multicultural former inhabitant of Vault 15, located five squares east of Vault 13. The town would eventually rise to become the most powerful faction on the West Coast: the New California Republic.

Many denizens of Shady Sands followed Dharma. Founded by a great ancestor of Aradesh belonging to one of the groups emerging from Vault 15, it was jump-started using the GECK,[1] which allowed the dwellers to establish a self-sufficient community and erect adobe buildings. In the 2240s, the small settlement grew and expanded, forming one of the most influential cities to emerge in the mid-23rd century, the New California Republic.

By 2161, it was a small, thriving, completely self-sufficient community, as they managed to adapt some of the wasteland soil to support crops (primarily corn and cabbage), drill a well to provide them with water, and even establish a brahmin herd. They kept mostly to themselves and proved large enough to deter most of the problems the wasteland presented, primarily the Khans raiders and the radscorpion attacks that plagued them. Both of these threats slowly escalated, as radscorpions were becoming more and more numerous and aggressive, while the raiders seemed hell bent on bringing them excitement at any cost. Their agriculture, while managing to sustain them in the arid region, was lacking as well.

These problems were alleviated by the Vault Dweller, who discovered the settlement en route to Vault 15. Initially distrusting, the inhabitants quickly warmed up to the hero as they proceeded to eliminate the radscorpion threat, and later rescued Tandi, Aradesh's daughter, from Khan captivity.

By 2241, Shady Sands had become one of the most significant settlements in New California, becoming the capital of the New California Republic with Aradesh as the nation's first president and Tandi as its second.[2]

The only entrance into Shady Sands. People need to holster their weapons or they will not be accepted into the town.

The garden is the field in which the inhabitants of Shady Sands grow their food.

The brahmin pen is the fenced-off coral that holds a brahmin herd for Shady Sands.

Shady Sands appears in Fallout and as the town New California Republic in Fallout 2. It is also mentioned in Fallout 3, Fallout: New Vegas, and Fallout 4. 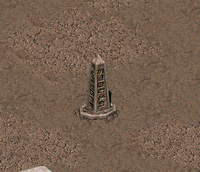 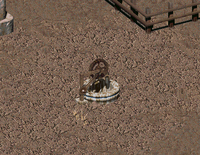 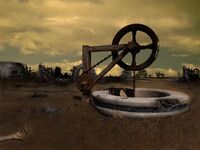 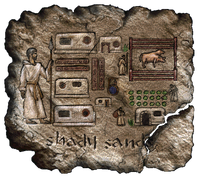 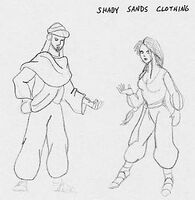