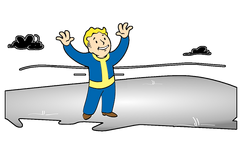 Shadow of Steel is a Brotherhood of Steel main quest in Fallout 4.

After observing a huge Brotherhood of Steel airship pass overhead, the Sole Survivor's Pip-Boy radio receives a transmission. Listen to it for further instructions before heading to the Cambridge Police Station and following Paladin Danse to the roof.

After a short Vertibird flight to the Brotherhood of Steel's flagship, the Prydwen, disembark onto the flight deck and speak with Lancer Captain Kells.

The Sole Survivor is ordered to attend an address being given by Elder Maxson. Speak to Maxson after listening to his speech. Regardless of the earlier rank in the Brotherhood, Maxson now bestows the title of knight on the Sole Survivor and a new suit of power armor, which can be found in bay 3 of the main deck.

Check in with Paladin Danse on the main deck to complete the quest.

Diplomacy
"It sure as hell ain't gonna be taken as a gesture of good faith from the other forces in the Commonwealth."
Provoking War
"No one brings that much firepower without plans to use it." [Valentine liked that.]
Who is Maxson?
Valentine will call Maxson a lunatic.
Quick War
Valentine will ask "Yeah, for who?" [Valentine disliked that.]

Diplomacy
"Ain't no one in the Commonwealth wondering about your intentions now."
Provoking War
"Folks don't usually appreciate having a floating fortress blocking their view."
Quick War
"Sure know how to make an entrance, I'll give you that."

Diplomacy
Piper will exclaim "What have you done?"
Provoking War
"You're right. There's no way this doesn't lead to more death." [Piper liked that.]
Who is Maxson?
"He's a dangerous man, that's what he is."
Quick War
"You two can't be that naive. That thing, it's just gonna escalate everything. You can't honestly believe it will stem the bloodshed?" [Piper disliked that.]

Retrieved from "https://fallout.fandom.com/wiki/Shadow_of_Steel?oldid=3415962"
Community content is available under CC-BY-SA unless otherwise noted.
... more about "Shadow of Steel"
RDF feed
Has platform
PC +, Playstation 4 +  and Xbox One +