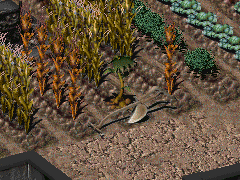 “Yes, I do talk. Better than some people, it seems. I'd smile at you right now, but I just don't have a mouth. [it laughs] Say, could you do me a big favor?”

Seymour is a plant living in Broken Hills in 2241.

Seymour is an unusual, intelligent, talking spore plant living in Broken Hills. He was grown from a tiny spore and nurtured by the insane Professor, but he realized from an early age that if he were to act as smart as he truly was, the professor would cut him into pieces to examine him. Therefore, Seymour played dumb and was planted outside in the Professor's garden.

Seymour appears only in Fallout 2.

The plant is a reference to Audrey II, the man-eating plant from Little Shop of Horrors. The protagonist of the film is named Seymour.

Add a photo to this gallery
Retrieved from "https://fallout.fandom.com/wiki/Seymour_(Fallout_2)?oldid=3458173"
Community content is available under CC-BY-SA unless otherwise noted.