The sewer waystation is located northwest of Grayditch and directly south of the Super-Duper Mart in the Capital Wasteland. It is the building that houses one of the entrances to the county sewer mainline.

The interior of the building itself is quite small, consisting of only two open rooms: a main "factory" type room and a smaller room resembling an office. The main room contains numerous production machines and a maze-like accompaniment of conveyor belts.

Leading down into the sewer lines is Gallo the ghoul's hideout and storage as well as feral ghouls, raiders and radroaches.

The sewer waystation appears only in Fallout 3. 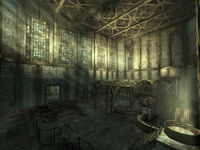