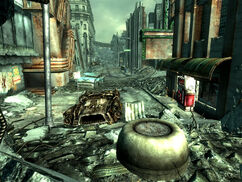 The sewer entrance is a small unmarked sewer location in Vernon Square. It is found at the end of a dead-end alley near the cinema in the northward side of the square, accessible via a manhole cover.

Upon first entry, the most notable feature is that access eastward to the actual sewer system tunnels is blocked by impassible bars. The passage north is trapped with a tripwire releasing a grenade bouquet. The area beyond contains four rooms connected by a center junction creating a cross layout. It would appear that these chambers were recently used as domicile or barracks. The southern and eastern rooms contain beds suitable for sleeping. The western entry room would seem to be a kitchen area and the northern locked room containing a Dean's Electronics seems to be for storage. The location is completely vacant and there are no signs of who the inhabitants may have been, but the dwelling spaces show no indications of raider, ghoul, or super mutant activity.

This sewer entrance appears only in Fallout 3.

Dean's Electronics
Add a photo to this gallery
Retrieved from "https://fallout.fandom.com/wiki/Sewer_entrance?oldid=3351172"
Community content is available under CC-BY-SA unless otherwise noted.