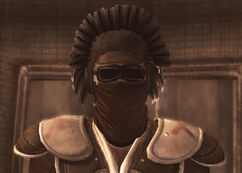 Severus, in front of his tent 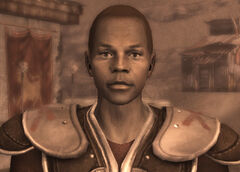 “Trade with Canyon Runner if you like. Make trouble and things won't go well for you.”

Decanus Severus is a quartermaster and Aurelius of Phoenix's second-in-command, living in Cottonwood Cove in 2281.

Originally the leader of his own contubernium assigned to the cove, Severus transitioned to the role of quartermaster when centurion Aurelius of Phoenix arrived.[1] Beyond taking care of the stocks of equipment and dealing with any captured gear, Severus also coordinates Legion patrols. The biggest problem is not the fact that the NCR avoids engagement with Legion raiding parties, particularly after the fall of Camp Searchlight, but the land mines the Army liberally peppers over the countryside to curtail Legion operations. The Legion has yet to develop a reliable method of disarming them.[2][3]

Arizona Scavenger: The player character may trade NCR dogtags to him for food, weapons, armor, or ammunition and Legion fame after passing a Barter check of 35 with Aurelius of Phoenix.

Retrieved from "https://fallout.fandom.com/wiki/Severus?oldid=3324839"
Community content is available under CC-BY-SA unless otherwise noted.