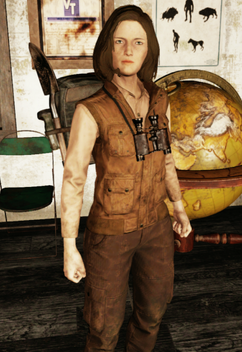 The Settler wanderer is a member of the Settlers and potential ally, found in random encounters in 2103.

Prior to 2103, the Settler wanderer lived in areas she claimed were crazier than Appalachia, though she does not go into specifics.[1] In 2103, she arrived in Appalachia around the time other Settlers appeared, traveling with Paige and making some friends within the group. However, for one reason or another, she decided not to stay at Foundation and instead continued wandering the road (and often fleeing from the dangers it presented). By the time she meets a Vault Dweller of Vault 76, however, she cannot wait to finally settle down and work on her music.[2]

Though she realizes the danger the Scorched present to fellow survivors, she still dislikes that they must be killed.[3]

The Settler wanderer appears only in Fallout 76, introduced in the Wastelanders update.

Retrieved from "https://fallout.fandom.com/wiki/Settler_wanderer?oldid=3465066"
Community content is available under CC-BY-SA unless otherwise noted.