W05_COMP_Actor_Lite_Scavenger
“Bingo! We have a winner here, kids! Will you look at that. Someone knows me! I knew it would happen.”

The Settler forager, also known as "Gramps," is a member of the Settlers and potential ally found at Founder's Hall. He may also be recruited in random encounters.

Before the Great War, the forager was a relatively well-known author.[1] Now that the apocalypse has wiped out many of his job responsibilities, he is looking for a place to settle down and focus on his writing.[2] He has been living in several different areas of the country since the war and has learned how to live off the land.

The forager is an older member of Paige's group who moved to Appalachia in 2103 when word came of the vault dwellers of Vault 76 recolonizing the area and rumors of treasure in one of the vaults in the area as well. Although he thought about retiring in a cabin in the woods, he thinks the C.A.M.P.s of the Vault Dwellers will do just fine.

With Charisma 3+, Intelligence 6+, Luck 8+, or Settler reputation of at least Cooperative, speaking with him will have him ask the residents if they have a place where he can stay for a while. Agreeing to take him in at their C.A.M.P. results in the option to craft a rocking chair for him at the C.A.M.P. Once built, he will arrive at the C.A.M.P. and stay there until his rocking chair is scrapped to make room for another ally, such as Beckett, Sofia Daguerre, or the forager's raider counterpart in the Raider punk, or the Settler wanderer. He will provide generic radiant quests to complete while staying at the C.A.M.P.

The Settler forager appears only in Fallout 76, introduced in the Wastelanders update. 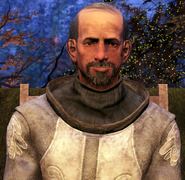