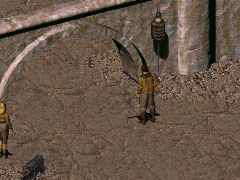 Leader of the guard

Stop the Radscorpions
Rescue Tandi from the Raiders

“Seth's a very good fighter. He's very determined. A little too much, sometimes. Still, he's devoted to the welfare of our village.”— Jarvis

Seth is the leader of the guards of Shady Sands during 2161. He stands guard at the front gate entrance to the small farming community, watching for any signs of trouble that might approach.

The leader of the guards in Shady Sands, Seth is favored by Aradesh. He organized the guards to protect against raider and radscorpion attacks alike. He regularly went to the radscorpion cave to try and destroy their source, but he was unsuccessful. Aradesh once attempted to set him up with Tandi, but she states that he is not her type.[1] Seth, however, still seems to hold some kind of attraction toward Tandi, as when explaining to the Vault Dweller that she has been kidnapped, he refers to her as his "girl" before catching himself. After the founding of the New California Republic, Seth would found the New California Rangers. During an expedition with Aradesh to look for Vault 13, Seth and Aradesh would disappear and were proclaimed dead.

He is revered in the NCR as the founder of the New California Rangers, who held the rank of First Ranger. Probably due to his high reputation, his portrait appears on the NCR $20 bill.

Seth appears only in Fallout. However, while not directly appearing in Fallout 2, he is mentioned by president Tandi.

Retrieved from "https://fallout.fandom.com/wiki/Seth_(Fallout)?oldid=3156031"
Community content is available under CC-BY-SA unless otherwise noted.