“The Mutants at the water shed need dirt-naps. Makes my shadow grow. You slice 'em and rewards run to you. Info, too.”

Set is the leader of the ghouls in Necropolis in 2161, with an exception to the Underground ghouls who lived in the sewers and the glowing ones who live in Vault 12.

Set styles himself as the leader of Necropolis, though his attitude and mannerisms are fairly passive-aggressive and otherwise rude. Before the Great War, he already lacked a sense of humor and had a mean authoritarian streak. Becoming a ghoul just deepened the already present problems.[2][3] When he took refuge in Vault 12 beneath Bakersfield in 2077, he and his son, Typhon, became ghouls, as a result, Set became even more set in his ways. He was part of the first group of survivors to emerge in the wasteland, due to this, Necropolis was founded in the summer of 2083.[4] Less than a year later, in 2084, Set wrestled control of the settlement from the original Overseer, driving him away.[5]

Set established the city as a refuge for all ghouls, intending for it to act as a safe haven, at least for those willing to follow his lead.[6] For years he kept the peace, until his rule was overthrown in 2157, by super mutant invaders searching for Vault 12. Set eventually negotiated peace with the super mutants, after explaining that they were the former vault dwellers. The super mutants established a stronghold in the town to ensure Set's cooperation and watch for humans passing through the city.[7]

As a figurehead working for the Master, Set's job is to keep the ghouls in line and watch for humans.[8] However, he resents being a pawn in the Master's game, no matter how much he hates him. Stuck between a hammer and a hard place, Set is ill tempered, frustrated, and prone to go off for the smallest of transgressions. He plots to overthrow the super mutants and get rid of them, but is quite aware that his ghouls cannot go toe to toe with the Master's troops and expect to win.[9]

Ultimately, Set perished in the retaliatory assault on Necropolis, ordered by the Master after the Vault Dweller killed Harry and his garrison off.[10]

Set as seen in Fallout

Set in the Café of Broken Dreams

"The Mutants at the water shed need dirt-naps. Makes my shadow grow. You slice 'em and rewards run to you. Info, too."

"Ahh, the thinker-normie. You killed those at the shed, yes? Came for reward?"

"[Groan] I'm gonna to eat you up and be singing that 'Happy Tummy' song. I got that happy tummy ..."

"There'd better be a killer reason for standin' in my shadow. Does 'next on the menu' ring a bell for ya ... normie." 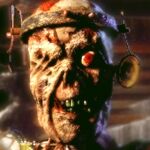 Clay model of the head in another stage of completion, featuring Scott Rodenhizer at work