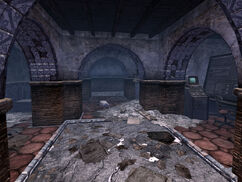 The service route is a location in Puesta del Sol in the Sierra Madre in 2281.

The service route has three entrances that require the foreman's key to unlock. One entrance is behind a Very Hard locked gate surrounded by the Cloud. Another one is in a southern courtyard. The key is located at the back of Puesta del Sol. West of the entrance to the Puesta del Sol switching station is a room with terminals and a bear trap. Up the stairs is a desk between a broken terminal and a coffee pot, where the key will be located.

The route itself consists mainly of tiled stone archways, with a collapsed area in the eastern part. If one does not unlock the service route but completes the Dead Money main storyline quests, the service route will automatically be unlocked and can be used to access two of the entrances without the foreman's key. However, the third entrance, behind the Very Hard locked gate, will still be locked. The foreman's key will still be needed to unlock it.

There is a sledgehammer lying on a pile of rubble here. It is the only weapon found in the Sierra Madre that Dog and God will equip.

The service route appears only in the Fallout: New Vegas add-on Dead Money.