The service rifle is a weapon in Fallout: New Vegas.

The New California Republic service rifle is a pre-War[Non-game 1] lightweight, air-cooled, magazine-fed, gas-operated rifle that uses the direct impingement gas principle with a rotary bolt locking mechanism.[1] It is typically loaded with 20 5.56mm rounds per magazine, giving NCR troopers good firepower in the field, despite the absence of automatic firing modes. The key here is its conventional layout, with excellent ergonomics, gas operation, and straight recoil combining to create a very accurate rifle, even in the hands of untrained conscripts. As a bonus, the full wood-and-metal rifle can be easily broken down for cleaning or replaced with a new unit manufactured by the Gun Runners.[2]

A semi-automatic medium power rifle, this rifle is chambered in the common 5.56mm cartridge and has a magazine capacity of 20 rounds. The rifle is simple yet well made, and since it requires relatively low strength and Guns skill to use accurately, it makes a very reliable weapon often used by New California Republic troopers.

As of patch 1.3.0.452, the weapon fires at a much greater rate with increased accuracy. This makes it a much more viable weapon for low level players with its high DPS. Likewise, this also means NCR troopers are far more effective in combat, with a squad able to project a greater amount of firepower.

One trait of the service rifle is its ability to repair high-end weapons like the light machine gun, sniper rifle and assault carbine using the Jury Rigging perk.

The service rifle can be modified with a forged receiver to increase durability and an upgraded spring to increase the rate of fire even further. Two other modifications that were cut from the game, a bayonet and a reflex sight, were to be available but were left as unfinished models before the release.

A service rifle model with the forged receiver modification

A service rifle model with the reflex sight modification

A service rifle model with the bayonet modification

A service rifle model with all the modifications, including cut content 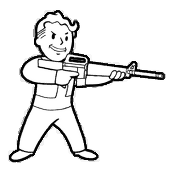 Service rifle in the trait image for Trigger Discipline 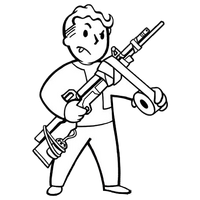 Retrieved from "https://fallout.fandom.com/wiki/Service_rifle?oldid=3488852"
Community content is available under CC-BY-SA unless otherwise noted.