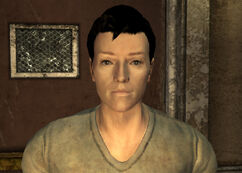 “You want your hair done too?”— Sergio

Sergio is a member of the Kings living in Freeside. He is located near the southernmost corner of the first floor of the King's School of Impersonation.

Not much is known about Sergio's past. He is part of the Kings, and is in charge of styling their hair to resemble the pre-War King. He only agrees to style the hair of official Kings members, and takes a lot of pride in this ability.

Sergio can change the Courier's hairstyle, hair color, and facial hair. He is recommended by the King himself once the Courier gains membership to his gang.

Sometimes Sergio isn't there. He cannot be found anywhere in the building, and exiting and re-entering doesn't seem to help, nor does waiting. He appears only after the Courier has killed a significant number of Kings and the King himself. [verified]

Retrieved from "https://fallout.fandom.com/wiki/Sergio?oldid=3161583"
Community content is available under CC-BY-SA unless otherwise noted.
... more about "Sergio"
RDF feed
Has platform
Playstation 3 +  and Xbox 360 +