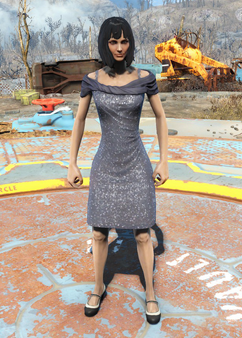 The sequin dress is a piece of clothing in Fallout 4.

It does not allow armor pieces, with the exception of arm pieces to be equipped when worn. This dress also includes a pair of white and black heels.

This dress remains as a dress even when equipped on a male character.

The sequin dress can be found in large containers throughout the Commonwealth, such as dressers, suitcases, and steamer trunks. It is also possible to find the dress in the cooler at Bedford Station as a random drop, but this is the only small container where it is possible. The dress can also be purchased from merchants.

There are only two fixed locations where the dress can be found:

The only named non-player character who wears this dress is Darla, Skinny Malone's current lover.

Worn by a male
Русский Українська
Community content is available under CC-BY-SA unless otherwise noted.
Advertisement