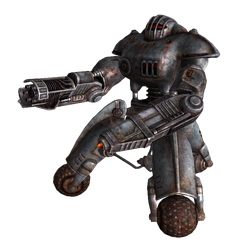 The sentry bot toy is a cut miscellaneous item in Fallout: New Vegas.

The sentry bot toy can be damaged and destroyed, most commonly if something attacks it. Once this happens it will no longer follow the player character, though it can be picked up and dropped as normal. It is not possible to repair the sentry bot toy once it is broken.

When dropping the item, it actually removes itself from the game and moves the appropriate creature to the Courier's location. Interacting with either creature simply moves it back to its original location in a hidden interior (the vendor chests cell) and gives the Courier a new copy of the appropriate miscellaneous item.

The sentry bot toy was cut from the final version of Fallout: New Vegas and is only available through the use of console commands.

Awww... ain't it sweet? Size compared to a human
Add an image to this gallery
Retrieved from "https://fallout.fandom.com/wiki/Sentry_bot_toy?oldid=3208647"
Community content is available under CC-BY-SA unless otherwise noted.