Sentry bots are a type of robot found in the Commonwealth in Fallout 4.

The Commonwealth variants of the sentry bot are similar in overall appearance to the ones encountered in the Capital Wasteland and Mojave, but are even larger (on par in height to a human wearing power armor and nearly twice as wide), appear to have a bulkier construction and are substantially more resilient. The typical weapons loadout of the sentry bot remains the same as seen in Fallout: New Vegas, with a missile launcher and minigun being the norm (except these miniguns appear to be unique 3 barreled variants chambered for the 5.56mm round). However, alternate weaponry configurations such as dual miniguns can also be observed. Annihilator sentry bots may also possess dual back-mounted mortar launchers, further enhancing their offensive capabilities.

Sentry bots are some of the rarest and the most difficult robots to defeat - fast, agile, heavily armed and resilient enough to absorb a direct hit from a mini nuke. After losing both main weapons they will initialize their self-destruct sequence and charge at the player character. Even with their ranged weaponry intact, sentry bots often charge into close combat to deliver powerful blows with their arms if one ventures too close, thus deterring attackers from any use of melee weapons. Since they explode on death with the force of a mini nuke, this tactic may prove even more dangerous to their opponent than their devastating long-range firepower. However, should a sentry bot engage the player character for too long, they will eventually enter a cooldown period, blasting steam out of their back and exposing their dual fusion cores. Hitting exposed fusion cores is the best way to cause damage to them. Players having the Penetrator perk need not wait for cooldown, and can use V.A.T.S. to target and destroy the fusion cores immediately, making this perk invaluable for fighting sentry bots. Also, unlike other robots it completely lacks a combat inhibitor, thus completely removing the possibility of using that to the player character's advantage.

The basic version of the sentry bot, this type of sentry bot is the weakest of the sentry bots in Fallout 4 but it still a difficult combatant compared to other robots, mainly due to its high Hit Point pool, a high Perception on par with assaultrons, above average Damage Resistance and Energy Resistance and high-powered armaments (either 2 5.56mm miniguns or one and a missile launcher).

Similar to the standard Annihilator Mk I but the mortars fire a timed explosive clump (grenades appear to be glued together) rather than a concussion shell increasing its usefulness in indoor areas and urban environments, this as well as having a further increased Hit Points and Damage Resistance and Energy Resistance results it being a formidable opponent.

An inactive combat sentry prototype MKIV can be found at the robotics disposal ground. Inside the shed near the entrance to the facility there is a terminal that has a holotape loaded. Initiating the holotape on the terminal activates the sentry bot outside, after which it immediately starts to patrol the area.

By ejecting the holotape from the terminal and using it in the player character's Pip-Boy, the Sole Survivor can command the sentry bot to go to different locations in the Commonwealth to clear of enemies, after which it will return to the junkyard. However, these locations are limited to nearby military sites. Once activated, the Sole Survivor can interact with it via the Robotics Expert perk to further the commands for it.

An extremely powerful version of the sentry bot, found in the RobCo Battlezone in the Galactic Zone. Only one exists in The Commonwealth.

Owing to their sheer power, constructing sentry bots requires huge amounts of rare crafting components on par with upgrading X-01 power armor, high levels of the Armorer, Science! and Blacksmith perks as well as at least one point in Gun Nut and Robotics Expert each, assuming one wishes to access all available customization options. A fully upgraded sentry bot boasts a very large health pool, heavy armor, decent speed, the most powerful long-range weaponry of any custom-built robot type in the game (up to and including twin Fat Man mortars mounted on its back) in addition to a very strong melee attack even without specific close combat weapons attached to its arms, extraordinarily high carry weight and is capable of clearing out entire hostile strongholds on its own, given the right circumstances. On top of which; automatron sentry bots are capable of manning guard posts at settlements (with the guard tower's staircase being just wide enough to accommodate them). This grants a settlement with a decent amount of open space for the sentry bot to maneuver a level of protection far out of proportion to its supposed defensive rating and can potentially provide further assistance to any settlers during a raid if it is fitted with a support system granting damage resistance or health regeneration to allies.

The sentry bot in Fallout 4 may be based on the T-1 tank featured in Terminator 3, as they both have dual miniguns, the ability to swivel around the waist, and are both designed for military use. However, a difference is that the T-1 propulsion system consists of tank tracks rather than mecanum wheels. 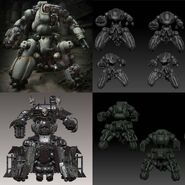 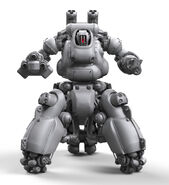 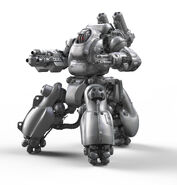 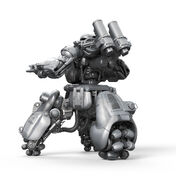 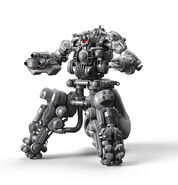 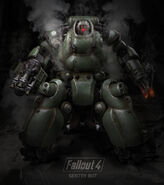 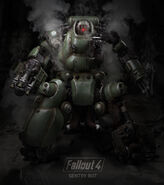 Cite error: <ref> tags exist, but no <references/> tag was found
Retrieved from "https://fallout.fandom.com/wiki/Sentry_bot_(Fallout_4)?oldid=3067825"
Community content is available under CC-BY-SA unless otherwise noted.